Birdwatching is a pleasant hobby which connects us to nature and to the world which often goes unnoticed. As I am from a place which is considered as a biodiversity hotspot, curiosity had grown within me towards our winged neighbors.  After moving to Sweden, we were hiking here and there to not just explore more of the country, but also to spot some new birds. Our checklist hadn’t grown long apart from a few gulls, pigeons and ducks (a few more species). But after witnessing the bird migration at Skagen, it got longer with raptors on the top. (See also :Skagen sojourn : Bird watching at the top of Denmark)

As a next step, we joined the Gothenburg Ornithological Society commonly known as GOF. They usually conduct birdwatching excursions in and around Sweden. There was one such planned program to Stora Mosse National Park which is around 160 KM from Gothenburg at the beginning of May that we found interesting.  We were just out of the wearing of winter jackets and the very first trip with this birding group during the onset of spring made it special.

On a Friday evening we joined a couple of other birders at Gothenburg Central Station and in the next few minutes our group was moving towards the destination. All were veteran birders and we were literally illiterates in front of them. But this fact didn’t dampen our excitement and that was a great opportunity indeed! Encountering Red Deer, Moose and some birds (notably Curlew) on the way made the journey more exciting.

When we reached our cottage in the evening, a faint Cuckoo call greeted us. Deer, which were grazing beside the house, scuttled when they saw us. Spring had certainly embraced the woods giving them a glossy green color. The red house situated in the forest looked lively and was big enough to accommodate all 12 of us. Soon our guides, Per and Barbro (a couple from Gothenburg who have tons of experience in birdwatching) had also arrived.  After our dinner we set out for night listening towards the lake Kävsjön.

The sky was full of twinkling stars. On the other end of the lake, far away from the bird tower where we were standing eagerly to listen to snipe calls, a train had passed by breaking the silence. Soon after, the show started. The swooping sound of Common Snipe could be clearly heard. Per explained that this diving is performed by males during courtship. They dive down in a precise angle and use tail feathers to create such drumming sounds.

We were also expecting to hear Jack Snipes’ “galloping horse” sound. Once a faint clip clop was heard (I think I heard!) but then these dwarf snipes were not really in a mood to entertain us. 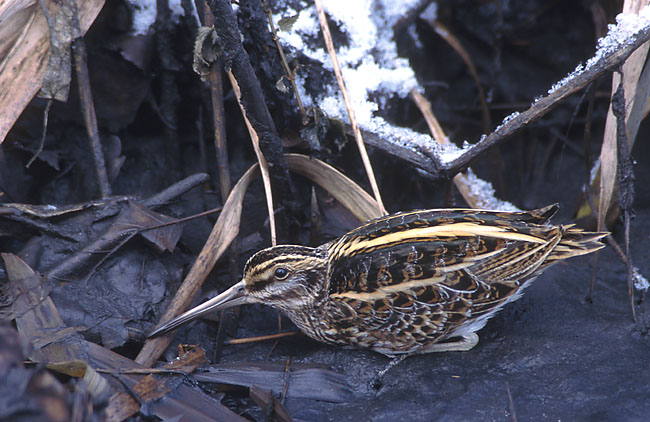 When the clock ticked 5:30 in the morning, we were already in the moors looking at the beauteous Black Grouse. It was safely perched atop a small tree, may be scanning the whole area for a mate. Our guides were so good in identifying the bird calls and spotting them, that we immediately added new bird to our checklist.

Later in the day, at around 7:30 AM, we started to hike around the big lake Kävsjön. I knew that it was going to be a long day. Near the bird tower (the same place where we stood the previous night) Northern Lapwings, Common Cranes, Common Redshank, and Song Thrush were strolling along the muddy lake bed. A Shoveler pair was enjoying the warmth of the sun. A Whooper Swan was busy building the nest. But the highlight was an Osprey which came scanning the area displaying its magnificent feathers.

In the woods there were small birds busy in filling their stomach. Along with common birds like Black Birds, Chaffinch, Willow Warbler, Blue Tit, Great Tit, and European Nuthatch, there were Coal Tits, Crested Tits, European Jay, Great Spotted Woodpecker, Goldcrest, and Tree Creeper as well. I was amazed to see a Common Snipe sitting on a branch at the top of a tree. It looked cool and undisturbed.

At lunch time we were at the Stora Mosse visitors’ center. As it was closed, we sat outside and ate our food. Great Tit, Blue Tit, and Chaffinches were patrolling around the bird feeders nearby. I was still eating when Anna spotted a snake. A ripple of excitement spread around. We jumped from our seats to take a look. A black and white snake (It was European Adder) was crawling among the bushes. It was identified as male, as females will be brownish in color. To our surprise there was another male snake and those two started to fight.

While walking back we spotted Marsh Harrier and Red Kite.  After reaching our lodging place, we got quite some time to rest. Later it was food which brought back the lost energy. Just beside the house Anoop was trying to get a picture of woodpecker, which turned out to be a Lesser Spotted Woodpecker. Near to this bird, a female was pecking continuously, making rhythmic sound.  A Great Spotted Woodpecker pair was also hanging around in the same area. Per heard a “krick krick” sound and found who was calling. There was a pair of Black Woodpeckers too. Spotting all the species at once at the same place, especially the black one, was joy.

The plan was to go to a lake called Draven later that day and check the area around. We had fairly some time to explore the surroundings. It was bitterly cold early in the morning, so I had to push myself out of the bed. We caught up with Pied Flycatchers, Goldcrest, Long Tailed Tits, Chaffinch, Wood Pipit, European Jay, European Nuthatch, and Common Starlings. The Cuckoos’ call could still be heard.

Later when we arrived at Draven, the lake was filled with water birds. There were teals, Wigeons, Shovelers, Whooper Swans, Coot, Great Crested Grebe and along with them there were Oystercatchers, and lapwings. Someone spotted Gargeny and Ruff though I did not see them. Hobby, Marsh Harrier, Hen Harrier, a few Red Kites and a Common Buzzard were added to the list of raptors. Our last stop was a birdwatching tower nearby. Manne found a Short Eared Owl flying over and when I observed through scope, it swooped down to catch prey. Finally, the number of species spotted was tallied. It turned out to be around 80.

Here are some images.

PS : Common snipe, Jack snipe and Black woopecker images are taken from  https://commons.wikimedia.org and sound clips are obtained from https://www.xeno-canto.org